is part of the Informa Markets Division of Informa PLC

This site is operated by a business or businesses owned by Informa PLC and all copyright resides with them. Informa PLC's registered office is 5 Howick Place, London SW1P 1WG. Registered in England and Wales. Number 8860726.

Energy Efficiency in Lighting was in the highlights at IstanbulLight. 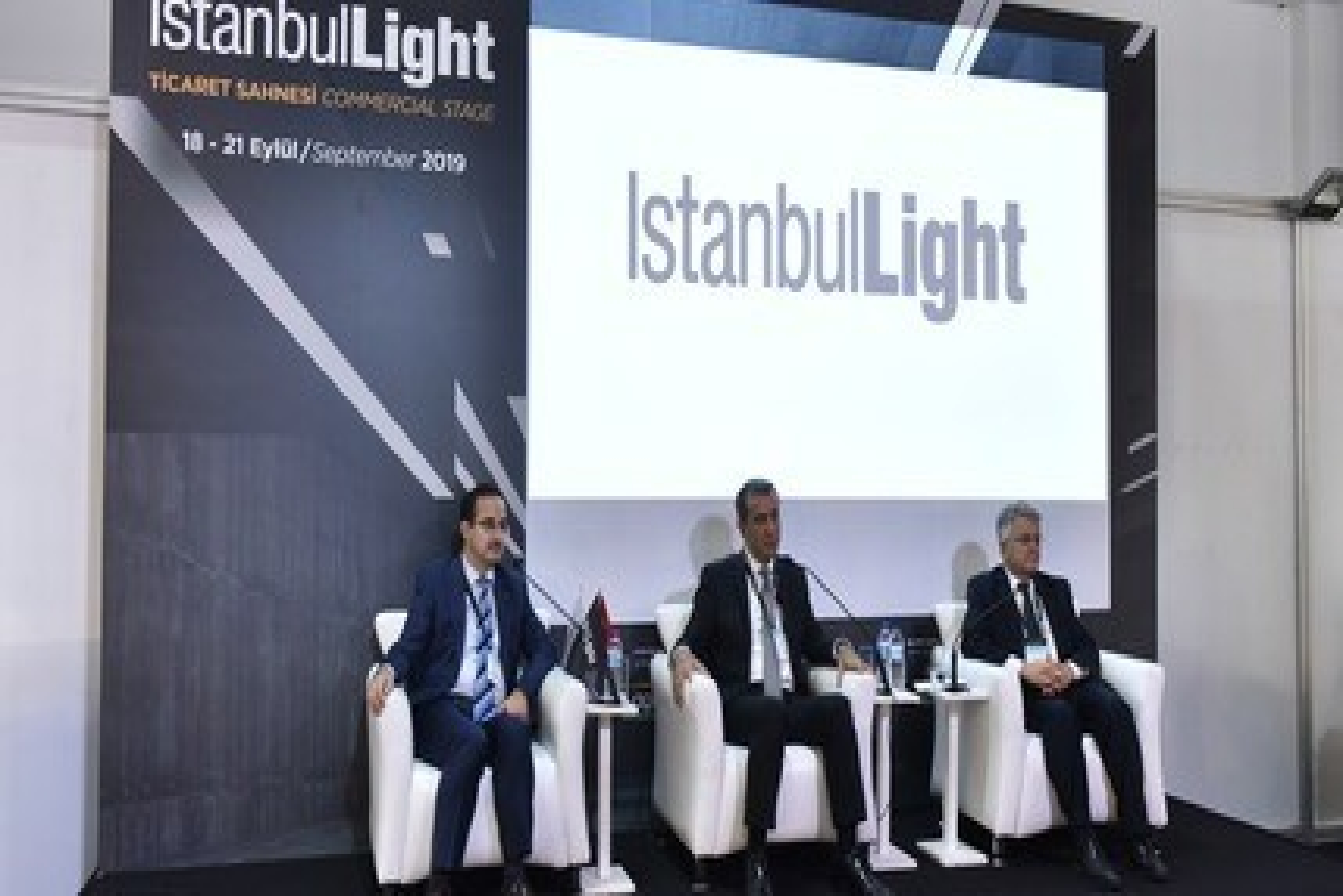 The Ministries of Energy and Natural Resources and Industry stated their supports to the ‘Lighting Industry’ at the ‘Energy Efficiency in Lighting’ Session on Commerce Stage at IstanbulLight 12th International Lighting & Electrical Equipment Fair and Congress. Mr. Oguz Can, Head of Energy Efficiency and Environment Office, underlined the importance of self-regulation in quality, standard and certification for the industry to take firm steps forward its progress. Mr. Mehmet Bozdemir, Director General of Industrial Products Safety and Control said: “we would like to redefine the 2020 supervision plan according to the industry”.

Mr. Oguz Can, Head of Energy Efficiency and Environment Office and Mr. Mehmet Bozdemir, Director General of Industrial Products Safety and Control enlightened their activities in lighting industry during the ‘Energy Efficiency in Lighting’ Session organized on Commerce Stage at IstanbulLight 12th International Lighting & Electrical Equipment Fair and Congress, continuing until September 21 at Istanbul Expo Center. The session was hosted by Mr. Fahir Gok, the President of the Association of Lighting Fixtures Producers (AGID).

Mr. Gok said: “when it comes to energy, not only the resource and product costs but also the environmental cost should be addressed” to highlight the indirect contributions of energy efficiency to the environment. Mr. Gok also mentioned that Turkey was fortunate for being the production and export base as the lighting industry and added: “import in the lighting industry today is now 500 million dollars compared to 1 billion dollars 4-5 years ago. We have a Lighting Centre project, under which we will build a laboratory for international certification services, an R&D center to support product and project design, a meeting and training platform to convene all stakeholders for different topics, as well as a waste management center in lighting industry”.

About 25.9 percent of electricity consumed in Turkey arises from lighting

Stating that about 25.9 percent of electricity consumed in Turkey arose from lighting, Mr. Oguz Can, Head of Energy Efficiency and Environment Office underlined the importance of self-regulation in quality, standard and certification for the industry to take firm steps towards its progress.

Mr. Can also added that 11th Development Plan of the Republic of Turkey was centered around efficiency and competitiveness and continued: “Our development plan contains topics including the support to local production and new generation lighting, generalization of more efficient and self-energized buildings, the support to intelligent transport systems on highways, and the implementation of energy efficiency products at public buildings. Moreover, the replacement of fixtures for general lighting with efficient fixtures is also included in the National Energy Efficiency Action Plan. We are now working on replacing 1 million 150 thousand street lights with led ones. Meanwhile, we keep supporting efficiency growth projects in the industry. Our support since now is TL 47,5 million. 35 of enterprises we have supported are now using LED’s, with 46 projects applied.”.

The awareness of local producers should be raised

Mr. Mehmet Bozdemir, Director General of Industrial Products Safety and Control stated that “actual producers should be distinguished from under-the-counter producers” and continued: “we would like to redefine the 2020 supervision and control plan according to the industry”. Mentioning that they were digitalizing market controls, Bozdemir added: “we conduct effective supervision on LED-based products. We have supervised more than 22 million LED bulbs this year. Our objective is to launch the products safely and promptly. We have to raise awareness of our importers and local products. We need to share data. Therefore, we have to be in cooperation with the industry”

We are raising movers and shakers

Declaring that they had been conducting general inspection mechanism since 2018 yet had not worked on any supervision mechanism as the Ministry of Industry, Bozdemir stated they were carrying out important activities to raise movers and shakers in the industry. Emphasizing the important activities that they have been performing as a ministry to raise experts and inspectors to lead the industry, Bozdemir underlined the inadequacy of testing and certification infrastructure in the lighting industry and expressed that: “not only TSE laboratories but also the laboratories of NGO’s and universities should be utilized to expand the area”. Adding that “the more effective your human resources are, the more effective your service quality will be”, Mr. Mehmet Bozdemir said “we need to convene with the industry a lot more often to address issues and solutions while maintaining inter-ministerial dialogues at a good level. Finally, I would like to thank AGID for their efforts and supports in the industry” and finished his speech.

THIS FAIR IS HELD UPON THE AUTHORIZATION OF THE UNION OF CHAMBERS AND COMMODITY EXCHANGES OF TURKEY,

IN ACCORDANCE WITH LAW NUMBER 5174.